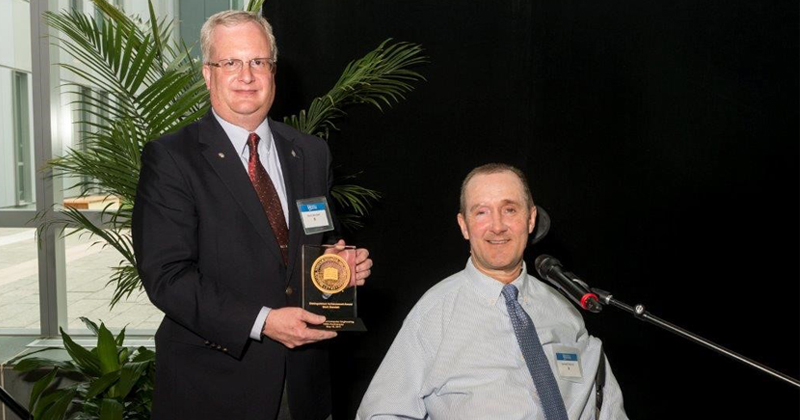 Mark Bendett, MEE’81, PhD’85, led a team that developed a laser used to manufacture smartphone screens. He was instrumental in the development of a process to improve upon LASIK eye surgery. In other words, there’s a good chance you’ve encountered one of Bendett’s inventions, for which he holds nearly five dozen patents, even if you never knew it.

For his achievements in laser technology, Bendett was recently named a Fellow of SPIE, the International Society for Optics and Photonics. His inventions have a range of applications from biomedical devices, telecommunications, aerospace technologies and much more.

“It was a pleasant surprise to be honored in this way,” he said. “I do a lot, but I tend to be more the catalyst than the face out front.”

Newly retired, Bendett spent more than three decades as a leader in industry, holding a variety of roles that included chief executive officer. He was most recently the strategy and business development manager at the Lockheed Martin Advanced Technology Laboratories. Throughout his career, he has maintained involvement in the technical aspects of his profession even as he has handled the responsibilities of being an executive— strategic planning, business development, managing personnel, fundraising and more.

“I’ve never forgotten how to get my hands dirty, which has helped me to not become obsolete,” he said. “I love the ideation process, to get in a room full of other engineers and come up with new ways of applying technology to challenging problems. Some ideas are better than others, but the really good ones can eventually turn into something cool. It’s a payment better than money—the psychic reward of seeing something useful come out of your ideas.”

Bendett also shares his ingenuity with UD’s College of Engineering, where he has served on the Advisory Council since 2002. Through the Bendett Fellowship in the Department of Electrical and Computer Engineering, he supports graduate students in their studies. He is also involved with the highly engaged Laird Fellows, a group of graduate students and alumni who received the George W. Laird Merit Fellowship. This fellowship for first-year graduate engineering students honors the memory of George W. Laird, who earned a bachelor’s degree and master’s degree from UD and died in 1977, at age 35, in a tragic accident. Bendett became a Laird Fellow in 1980. In 2017, Bendett received the Electrical and Computer Engineering department’s Distinguished Achievement Award, the most prestigious award bestowed upon alumni.

Why does he love UD so much? There are many reasons. As an undergraduate student in physics at Haverford College, Bendett spent nearly as much time hanging from the rafters as a theater lighting specialist as he did solving equations. Then he pursued his master’s degree and doctoral degree in electrical and computer engineering department at the University of Delaware in part because of the department’s emphasis on applications.

“We had professors from industry who showed us how to apply engineering to real-world problems,” he said. “I’m a build-stuff kind of guy, so that’s what I wanted.” Fascinated by light, he worked on solar cells at UD’s Institute of Energy Conversion and controlling microwave and RF systems using lasers.

Now that he’s retired, Bendett is planning to spend more time at UD. He’s passionate about entrepreneurship and wants to help students and professors find new applications for their technology and pursue commercialization.