A SECOND ACT IN CYBERSECURITY 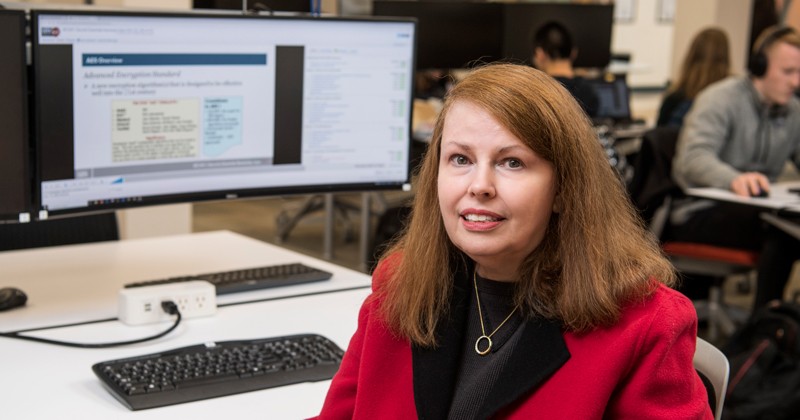 Alumnus is a rising star in her second career

Patricia Lehman, a resident of Wilmington, Delaware, spent decades as a freelance writer. She wrote award-winning books and magazine articles about Boston terriers, miniature pinschers and other tiny domestic dogs.

Today, she spends a little less time thinking about human’s best friend — instead focusing on how to protect our infrastructure from malicious enemies. Lehman earned a master’s degree in cybersecurity from the University of Delaware in 2019 and continues to hone her skills.

In the 2019 U.S. Cyber FastTrack competition, which tests the skills of high-aptitude students nationwide, Lehman was selected for a full scholarship ($22,000 value) to the Undergraduate Certificate program in Applied CyberSecurity accredited by the Middle States Commission on Higher Education and operated by the SANS Technology Institute (SANS.edu). Lehman was one of 100 students representing 63 different schools across 28 states to be selected out of more than 13,000 candidates. The courses began in December 2019.

It takes a lot of guts to switch careers, but if you’re looking for an upgrade, cybersecurity is a smart choice. The cybersecurity workforce needs to grow by 62 percent to meet the demands of businesses in the United States, according to a report by one of the world’s leading cybersecurity professional organizations.

As a longtime writer, Lehman closely follows the news, and she started to grow concerned about data breaches and other news related to hacking and security. She decided to study cybersecurity because she wanted to make a difference.

While the transition from author to cybersecurity expert might seem like a 180-degree turn, Lehman has found that the combination of creativity and logic needed for success in writing also helps her outsmart adversaries.

“There’s been a lot of writing in the coursework, and I think being able to write well has helped a lot,” said Lehman. “I got interested in computers because I was using them in my writing, and I wanted to find out more about how they worked.”

Lehman started years ago with a few computing courses through UD’s Professional and Continuing Studies program. Later, she enrolled in the computer network engineering technology program at Delaware Technical Community College, where she earned an associate’s degree in 2007. In 2015, she received a bachelor’s degree in computer and network security from Wilmington University. Then in 2017, she enrolled in UD’s master’s degree in cybersecurity program, which can be completed on campus or online. She took courses in networking, cryptography, programming and more. Lehman earned a 4.0 GPA in all three degrees, and at UD, she was accepted into the prestigious Phi Kappa Phi Honor Society.

“Each course built on the previous ones and made me more and more interested in the field,” she said. “And the more I learned, the more I realized how much I didn’t know. It’s a field where you never stop learning.”

Andy Novocin, associate professor of electrical and computer engineering, met Lehman when she took his crash course in coding. Novocin was impressed by her potential and her persistence. No matter how challenging the project, Lehman kept at it. Then, Lehman took Novocin’s crypto class.

“Again, she was very dedicated and her persistence would get her better results than some of the younger students who had less self-mastery,” said Novocin. “That experience got her into our Capture-the-Flag cybersecurity competition team where she was the team’s ‘secret weapon’ working quietly in the background every competition. I suspect that she logged 2400-plus hours in that calendar year, and that’s when she won the cyber scholarship.”

Lehman also took some electrical engineering courses on smart grids, microgrids, and vehicle-to-grid technology, all of which piqued her interest enough that she plans to pursue a second master’s degree in electrical and computer engineering at UD.

“I think protecting the infrastructure of the power companies is going to be critical, so I’m trying to merge those together — cybersecurity and the power supply,” she said.

Lehman plans to pursue a career in cybersecurity in government or the private sector.

2020, News A SECOND ACT IN CYBERSECURITY