Exploring Mysteries of the Universe 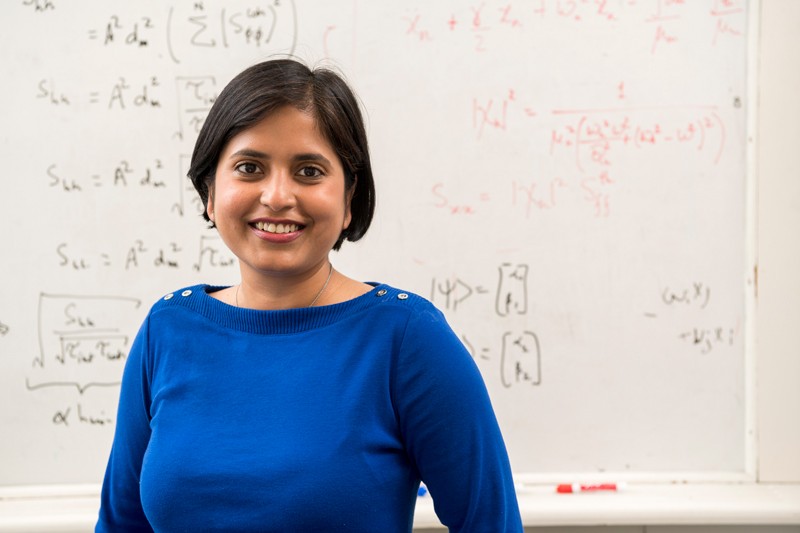 From gravitational waves to dark matter, the universe holds many difficult-to-detect mysteries that still baffle even the scientists who study these subjects.

To identify and explore the promise and limitations of using state-of-the-art quantum devices to detect astrophysical phenomena, Swati Singh, an assistant professor of electrical and computer engineering at the University of Delaware, recently received a $245,532 grant from the National Science Foundation (NSF).

The role of emerging quantum platforms

Gravitational waves from distant neutron stars are difficult to detect. Right now, gravitational waves can be detected at the Laser Interferometer Gravitational-Wave Observatory (LIGO) in Hanford, Washington, and Livingston, Louisiana. LIGO has been developed over decades with the efforts of hundreds of scientists. Most current searches of dark matter involve ton-scale experiments using cryogenics or liquefied gases like xenon or argon, and operate in deep underground mines.

However, dark matter and gravitational waves exert tiny, weak forces that may be detectable by a new crop of quantum devices, such as centimeter-scale or smaller superfluid helium acoustic devices, quartz resonators and photonic crystal cavities. All these devices involve small masses that are deformed due to interaction with weak forces. By continuously monitoring them, scientists can detect the tiny motion due to interaction with weak forces.

Singh is using these quantum systems to understand astrophysical phenomena.

“These kinds of systems are a thousand times smaller and a thousand times cheaper, but they are also only good at a very tiny window in frequency,” said Singh. “You can think of building cheaper, smaller narrow band detectors that are good for range of astrophysical sources. I want to see how far that technology can be pushed.”

She also wants to push the field of quantum sensing forward in general. “It has been demonstrated multiple times, in multiple ways, that using quantum correlations makes better sensors than the limits permitted by classical technology,” she said.

One challenge of this effort is that these systems are difficult to control for long periods.

“Devices operating in the quantum regime are very fragile and can be destroyed by measurement from the outside world,” said Singh. “Usually this a problem, which is the case in quantum computing for example, but if you look at these systems in a controlled setting, you can use this destruction of quantum properties as a way to measure your environment.”

Singh, a theorist, works with collaborators who specialize in experimental studies on mechanical systems.

“You can think of them as really amazing mass-on-spring systems, which all freshmen science and engineering students at some point encounter,” said Singh. By attaching an object to a spring, one can demonstrate periodic motion, examining how many cycles occur in a given time.

As Singh provides calculations, the experimentalists can adjust their prototype systems. It’s a back-and-forth, iterative process.

On Sept. 17, 2019, she discussed the research at the Institute for Theoretical Atomic Molecular and Optical Physics Laboratory Cosmology Workshop at Harvard University.

A passion for quantum science

Singh has been studying quantum science since she was 18. She was intrigued by the subject in her undergraduate physics courses at McMaster University, and after spending a summer in a research laboratory, she felt inspired to learn the math behind the quantum behavior she observed.

“Understanding the nature of dark matter is one of the biggest fundamental science problems for my generation,” said Singh. “So is pushing quantum mechanics to objects much bigger than atoms and molecules.”

The growing community of quantum scientists at UD benefits from students who are quick to learn new, cutting-edge concepts in quantum science.

“I’m very impressed by the bright students I’ve found here,” said Singh. “For an early career person who is just setting up a group, that is very important, and possibly the most rewarding part of the job.”

2019, News Exploring Mysteries of the Universe