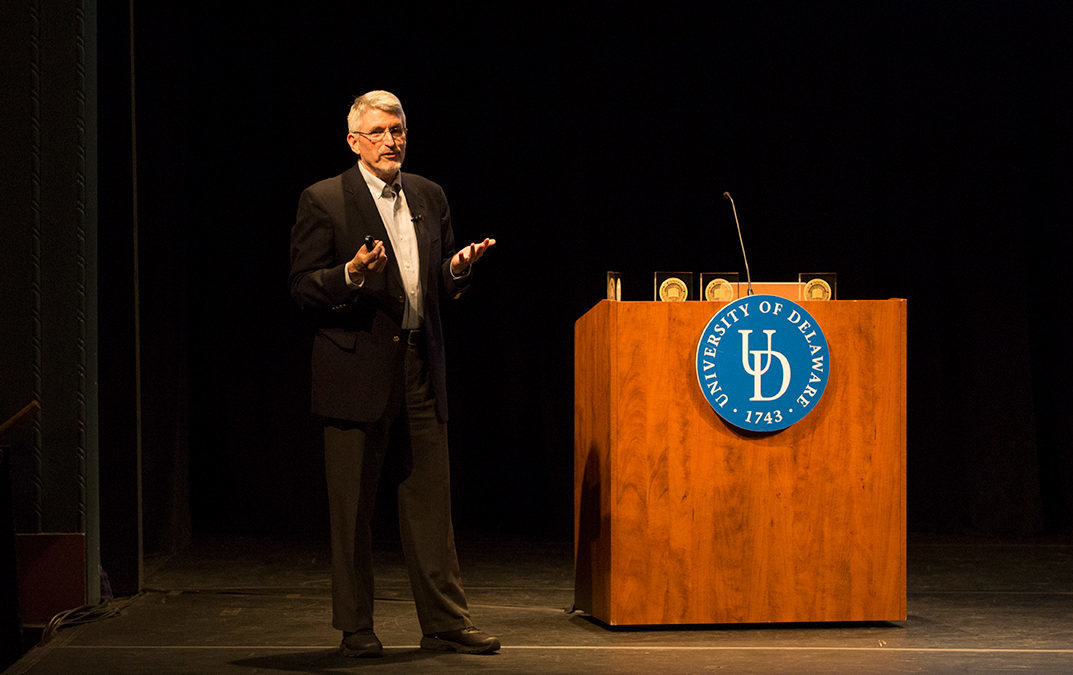 The Department of Electrical and Computer Engineering (ECE) recognized outstanding alumni and students at ECE Research Day on May 1, 2019.

“At ECE Research Day, we celebrate the innovative projects and research our students have been working on all year,” said Ken Barner, Charles Black Evans Professor of Electrical and Computer Engineering and chair of the department. “We are also honored to recognize the accomplishments of a few of our highly successful alumni.”

Coyle is the John B. Peatman Distinguished Professor of Electrical and Computer Engineering at the Georgia Institute of Technology and a Georgia Research Alliance Eminent Scholar. He is the Founder and Director of the Vertically Integrated Projects (VIP) Program, which integrates research and education by embedding large-scale, long-term teams of undergraduates in the research efforts of faculty and graduate students. He is also the Director of the VIP Consortium, which includes 28 universities. Coyle received a B.S. in electrical engineering at UD in 1978, followed by a master’s and Ph.D. from Princeton University in 1980 and 1982. Coyle was a co-recipient of the U.S. National Academy of Engineering’s 2005 Bernard M. Gordon Prize for Innovation in Engineering and Technology Education, and in 1998, Coyle was elected a Fellow of IEEE for his contributions to the theory of nonlinear signal processing. He has received many other awards, including the 1997 Chester F. Carlson Award from the American Society for Engineering Education and the 1986 Paper Award from IEEE Signal Processing Society. His research interests include systemic reform of higher education, signal and information processing, and wireless and sensor networks.

Richard Martin received the Outstanding Service Award, which acknowledges alumni who, through dedication and exemplary volunteer service, illustrate broad leadership in support of the aims and objectives of the department.

Martin is an Associate Professor of Practice in UD’s Department of Electrical and Computer Engineering. He holds a B.S. degree in physics from Millersville University of Pennsylvania and M.B.A., M.S.E.E. and Ph.D. degrees from UD. His doctoral work on photonic devices was conducted at NASA’s Jet Propulsion Laboratory (JPL) under a NASA Graduate Student Research Fellowship. After working at JPL for a year on Micro-electromechanical systems, Martin moved to Delaware to work at W.L. Gore and Associates.  After nine years at Gore, he taught as an adjunct professor at multiple universities while working with technology-based startups. Martin has over 25 years of industrial experience designing low-noise amplifier circuits and photonics-based sensors and has led the design, characterization, and fabrication of numerous high-speed devices and embedded systems.  In 2017, Rick became a full-time UD faculty member, teaching microcontroller systems, analog circuits, and classes covering design, prototyping, entrepreneurship, and IoT devices.  He holds an affiliated faculty position in UD’s Horn Entrepreneurship Program and serves as Chief Technology Officer of Resonate Forward LLC, a start-up developing wearable therapeutic devices for people with Parkinson’s Disease.

Kurt Akeley, received the Entrepreneurial Innovation Award, which is conferred upon alumni who have created an innovative business, developed a new product, brought to market a new venture or expanded an existing business.

Akeley is a distinguished engineer at Google, where he works in the areas of virtual and augmented reality.  A pioneer in the field of computer graphics and a co-founder of Silicon Graphics (later known as SGI), Kurt led the development of innovative products such as RealityEngine and the industry-standard OpenGL graphics system.  After leaving SGI in 2001, Kurt completed his long-deferred PhD work at Stanford, working in the areas of stereo 3-D display and human perception.  He then joined Microsoft Research, where he was assistant managing director of Microsoft’s research lab in Beijing, and, after returning to the US in 2007, developed a prototype light-field display with resolution sufficient to stimulate focus cues in human viewers. Prior to joining Google, Kurt was CTO at Lytro, where he guided system and software development for Lytro’s computational photography and virtual reality platforms.

Nicole Wells received the Young Alumni Achievement Award, which recognizes alumni who have graduated within the past 15 years and have excelled in their chosen professions. Students, faculty and alumni celebrate in the iSuite, a facility that includes a cyber range, makerspace, and collaboration hub.